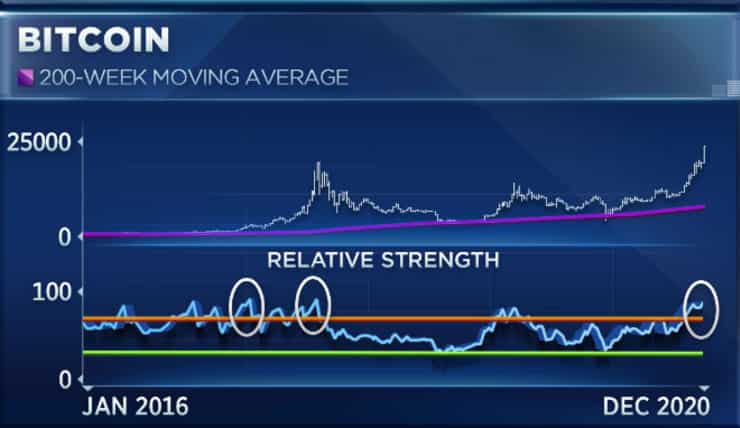 Bitcoin looks poised to continue its price rise. The weekly Relative Strength Index (RSI) supports this bullish outlook. The metric, which stands at 47.16, is indicating an incoming price rally.

A tweet by the pseudonymous crypto market analyst, Plan B, first pointed this out. In the tweet, Plan B said the data was “incredibly bullish” for Bitcoin.

The RSI is a metric used to visualize the momentum of financial markets. It is used to measure the speed and magnitude of directional price movements. It is intended to chart the current and historical strength or weakness of a stock or market based on the closing prices of a recent trading period.

In traditional markets, an RSI of 30 is needed to indicate that an asset is currently oversold and is poised for a price surge. However, the Bitcoin stock-to-flow (S2F) model creator maintains that the RSI of Bitcoin enters the oversold region from a value of 45. This is because Bitcoin as an asset has a continuous upward trend.

The bullish RSI data is coming after Plan B also noted that both the S2F and the logarithmic regression models point to the price of Bitcoin reaching $100,000 in 2023.

Both S2F and logarithmic regression point to $100K in 2023. pic.twitter.com/NHqoRpEmUl

Bitcoin is trading at around $44,100, up 0.58% on the day at the time of writing. According to the crypto market social and on-chain metric tracker, Santiment, the return of the price of Bitcoin above $44,200 is driving positive sentiments for traders. Santiment adds that the price of Bitcoin still has room to add gains before market euphoria kicks in.

Remarkably, Bitcoin has also been surging in recent times. It is up 1.5% in the last seven days, reaching a one-month high of over $45,600. In general, the market sentiment around Bitcoin shows that investor confidence is on the rise.